The Cart Horse who went Eventing

I ticked something at the very top of my bucket list off this weekend just been. I took my homebred, self produced full Clydesdale eventing! OK, ok, it was only the 65cm/Intro class but it was a BIG deal for me! I haven't evented in 16 odd years and the last time I was doing it, I was riding a horse who was waaaaaaaaaaaaaay more experienced than I and who basically carted me over anything and everything and all I had to do was point and hold on.

Meg was, in a word, AWESOME! She's a very sensitive girl and found the whole experience insanely intense (she trembled ALL day, the nervous energy she must have expended blows my mind!) and she forgot her manners a few times at the gear checks but she was absolutely phenomenal when it counted.

The dressage was next to the road with trucks and cars whizzing past and she wasn't overly impressed. I also didn't want to exhaust her working her in to a point where she was too tired to be tense because I was so well aware we still have the SJ and XC to get through so our test was not our best work. She was fairly resistant in parts and it did feel somewhat like riding a turbo charged tractor but she did some really super forward work and tried her very best for me - what more could I ask for? I was floored to later discover she had won the dressage section with our nearest competitor nearly 5% behind us - GO CLOMPETY!

Welcome to the World

At 3.15am on the 22nd of October 2016, Charlie (Volksraad x Casual Lies/Deputy Governor) produced a lovely brown filly by Crossiebeg Brennan. The foaling was easy and uneventful and all post foaling milestones were met by the foal as if she had read all the text books. Unfortunately Charlie retained a portion of placenta so required a few vet visits for flushing and lots of heavy duty antibiotics and oxytocin but she has come through it all well.

I have named the foal TF L'il Bit Smitten or Lil/Lily. We are currently offering Charlie and Lil for sale. For more details, please see our For Sale page. 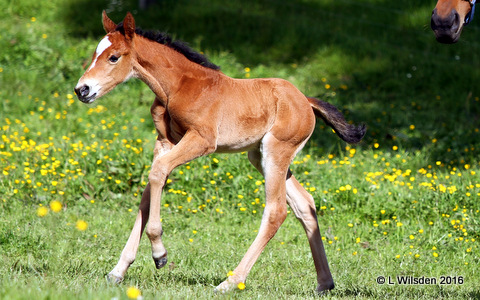 We took Tempi down to Solway to have a look around the grounds and some of the XC fences. She was as green as spring grass (sheep tracks are cavernous pony eating holes that one MUST be VERY wary of and show jumping poles may just leap up and attack so best not to get too close to those either) but there were some very pleasing moments and I am very proud of what a super pony she is and the potential she shows. Clarissa rode her beautifully and even though she was very well behaved, she did make her work pretty hard for these results. For all the photos, visit my blog entry: HERE 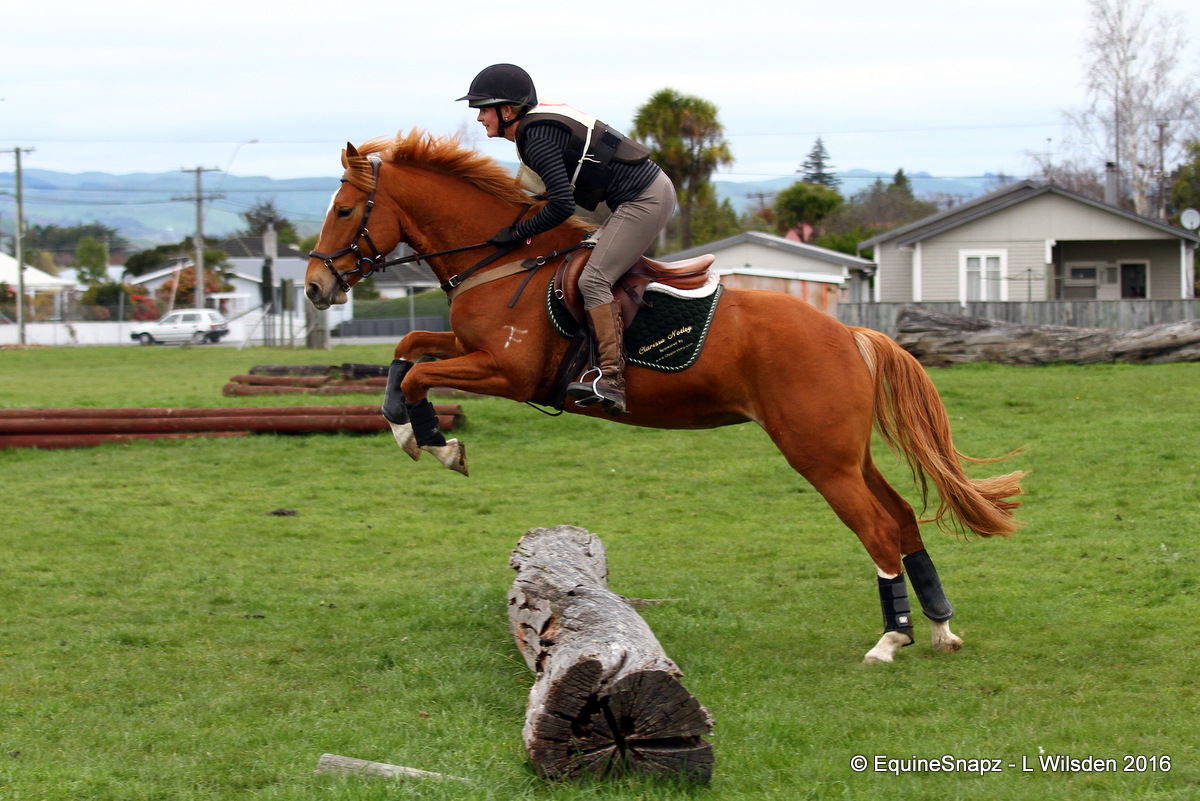 Ailbhe continues to delight us with his progress and now has two competitive dressage starts under his girth. He also continues his run of being in the ribbons with four tests and four placings and scores over 65%, meaning that to date, he's never been unplaced in anything he has entered. Clever boy! 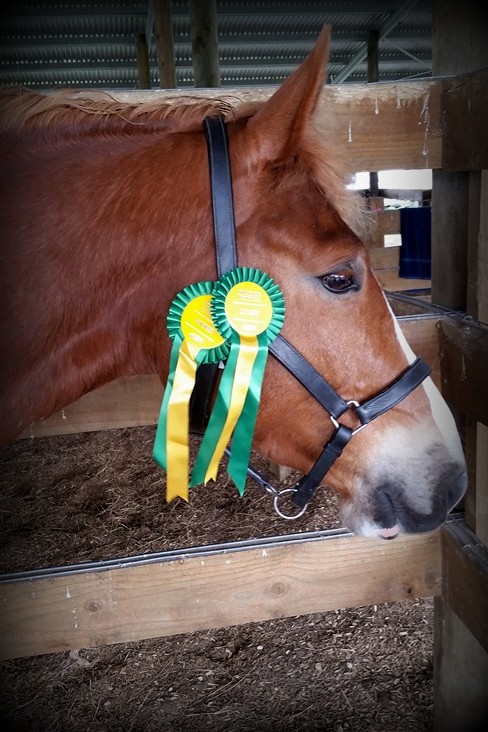 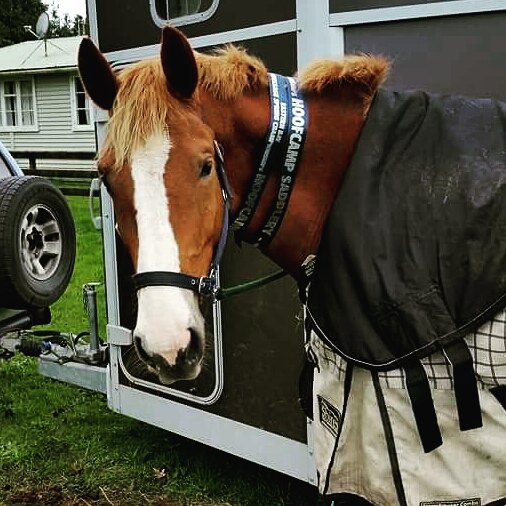 A new broodmare joins the herd

We have purchased a new mare for the broodmare paddock - SUPER exciting!!!

Mischique (or Mag - pronounced Madge) is a seven year old 15.1HH mare by the Aberlou descendant sire 'Sacred Hill Answer Back'. Answer Back was NZ SJ Horse of the Year in 2006 with Claire Wilson and is by the Aberlou son, Backchat. Mag's dam, 'Magic', won the NZ Pony of the Year title in 2004 so we are going to have a crack at breeding us some superstar jumping ponies of the future! Can't wait!! 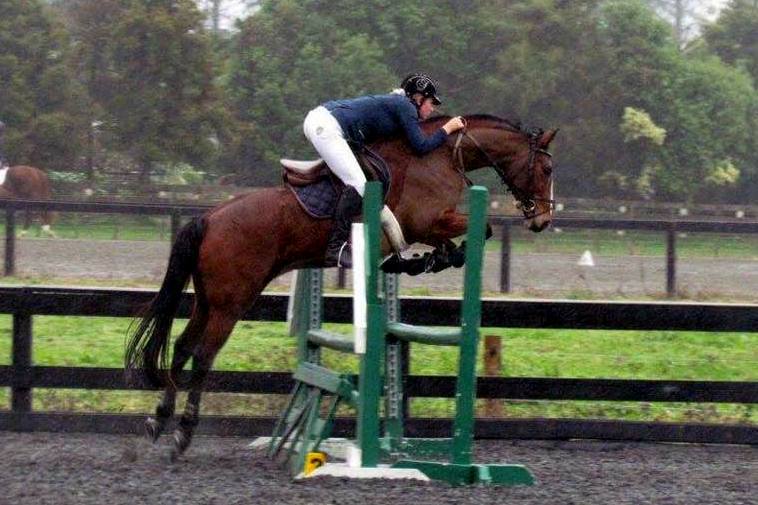 The Sire: Answer Back 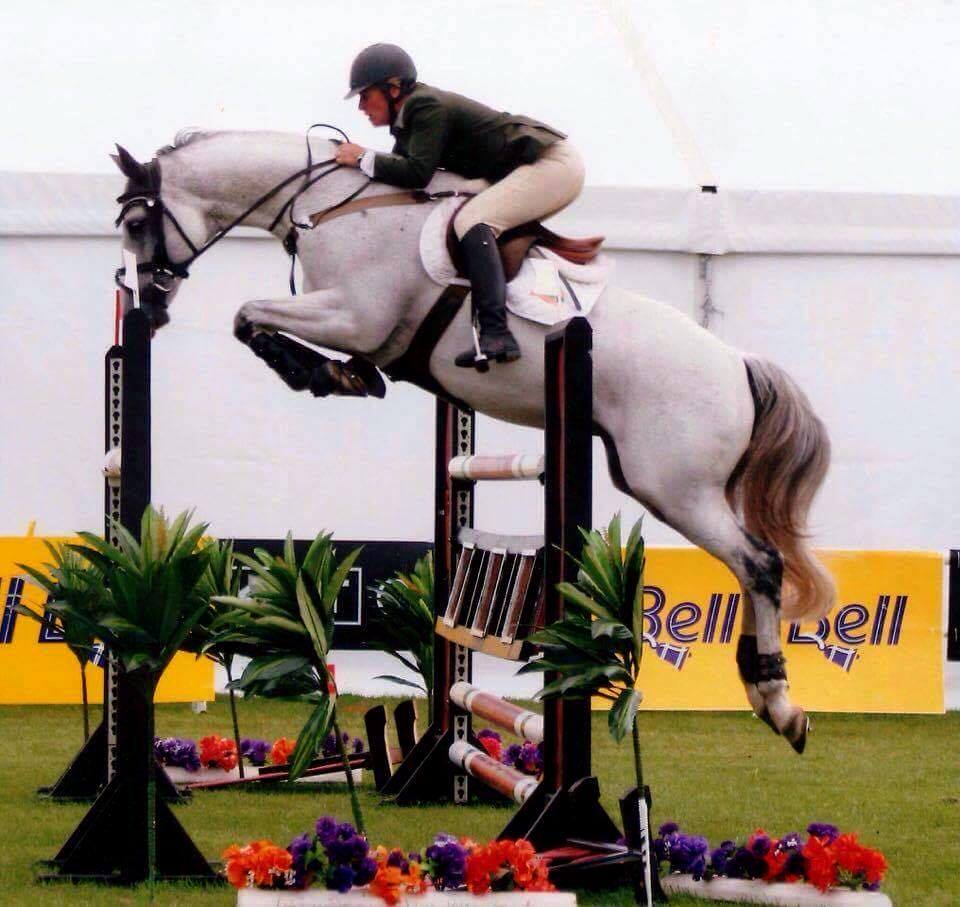 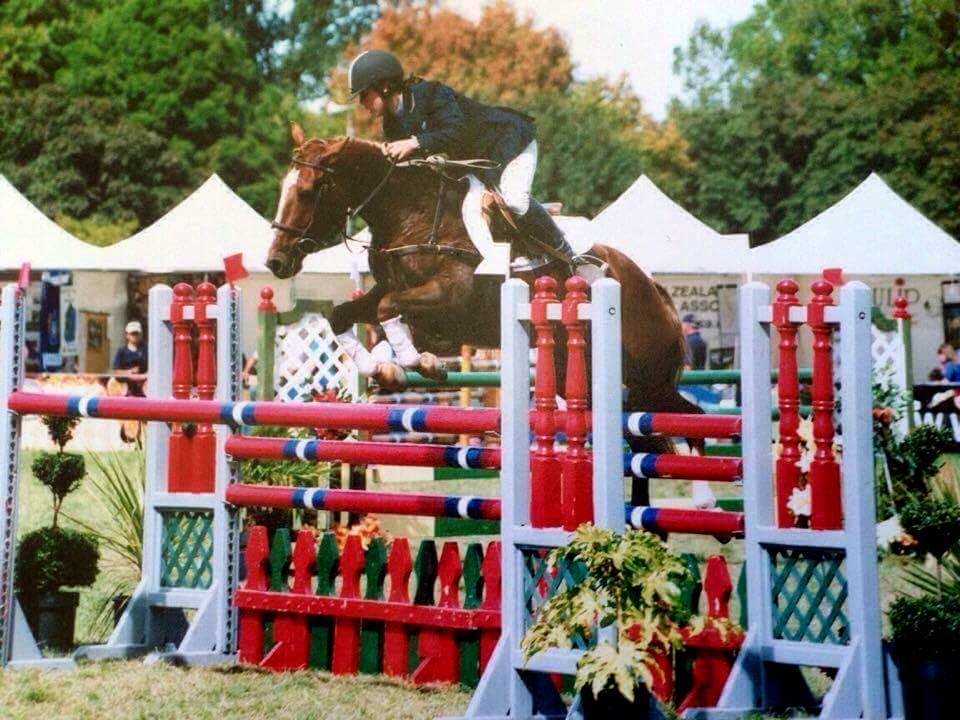 5yo Snorkel (TF Special Delivery - TF Hamish x Glencree Liberty High) has just been to The North Island Inter-Secondary Schools Dressage Championships with her 13 year old rider and come home with a 2nd and a 4th in her Section. Way to go Caitlin and Snorks!!! 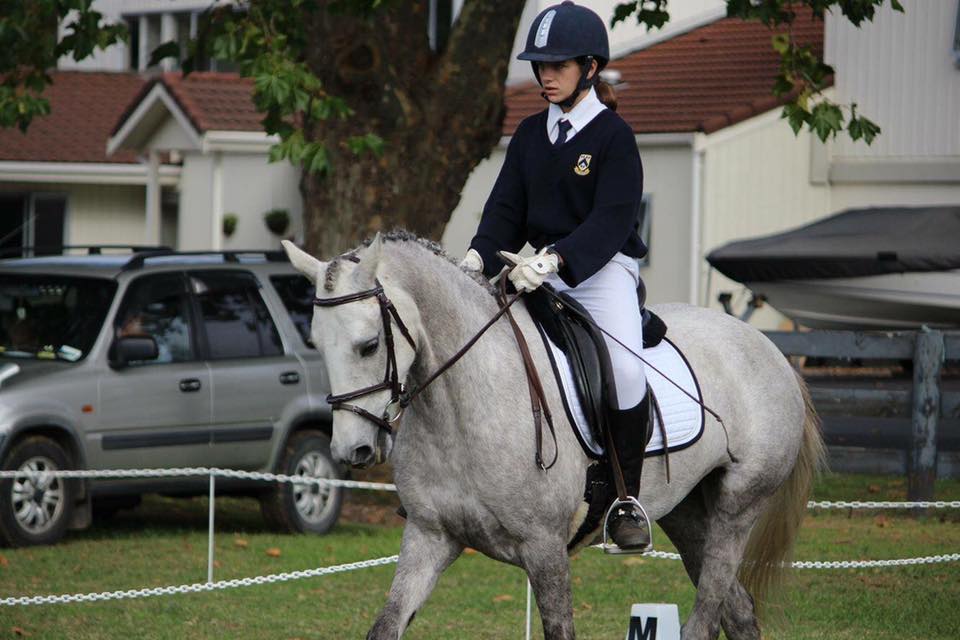 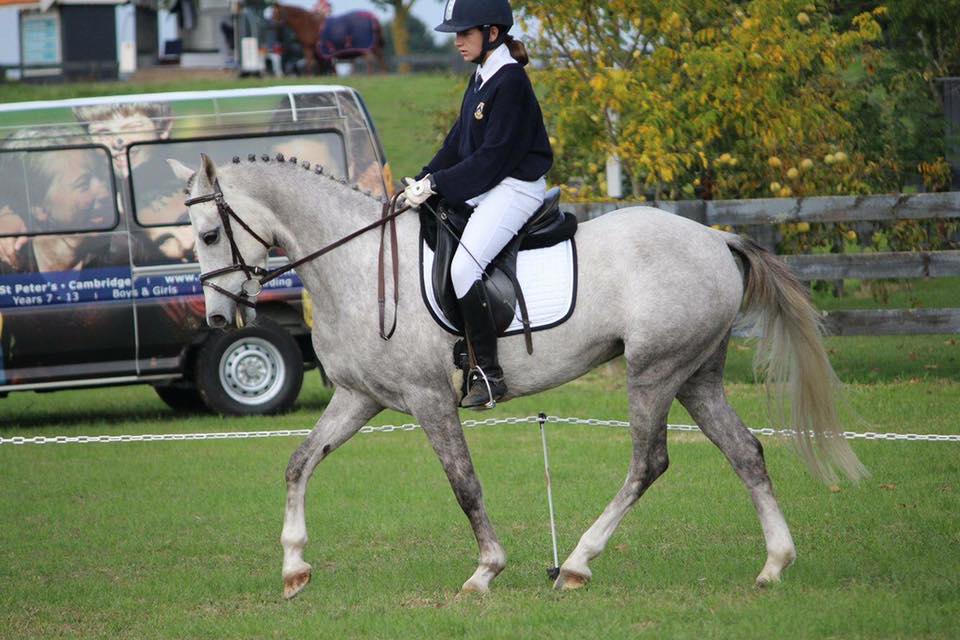 Ailbhe, who was the MOST generous young horse for me to fumble through the breaking in process, has headed to Tauranga to live with Juliet. He's having quite the amazing adventure up there and has already been hacking in company and alone and out to his very first outing (which was today) where not only did he behave extremely well, especially for a baby horse who has never been to a competition or riding/in hand event before, but he also came home with Supreme Champion!! I've stolen some photos from Juliet's page on Facebook to share here. 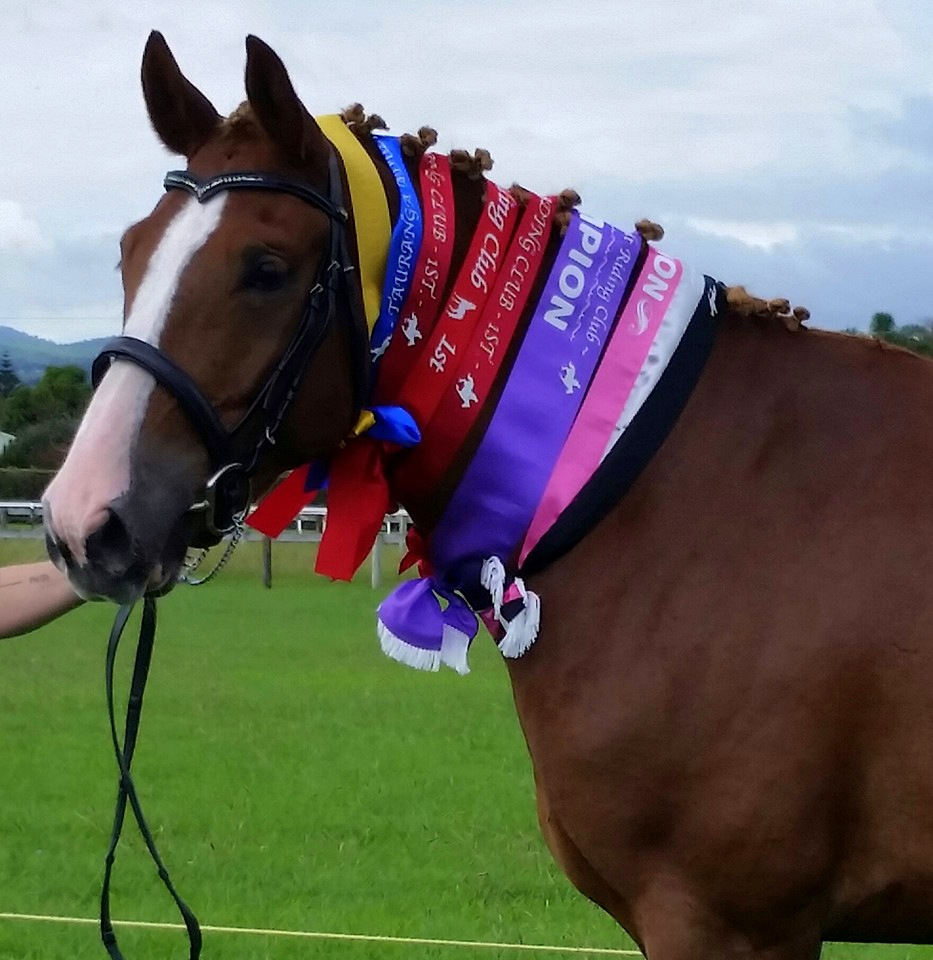 Today Caitlin and Snorkel (TF Special Delivery) had their very first ridden competition. Five months under saddle and Snorkel is out in the big wide world and showing everyone that not only is she ready but she's more than capable of getting her boogie on and being super competitive too! What a fantastic start! I can't wait to see what this pair get up to together - I have a feeling that this is going to be a very special partnership. Yay!! 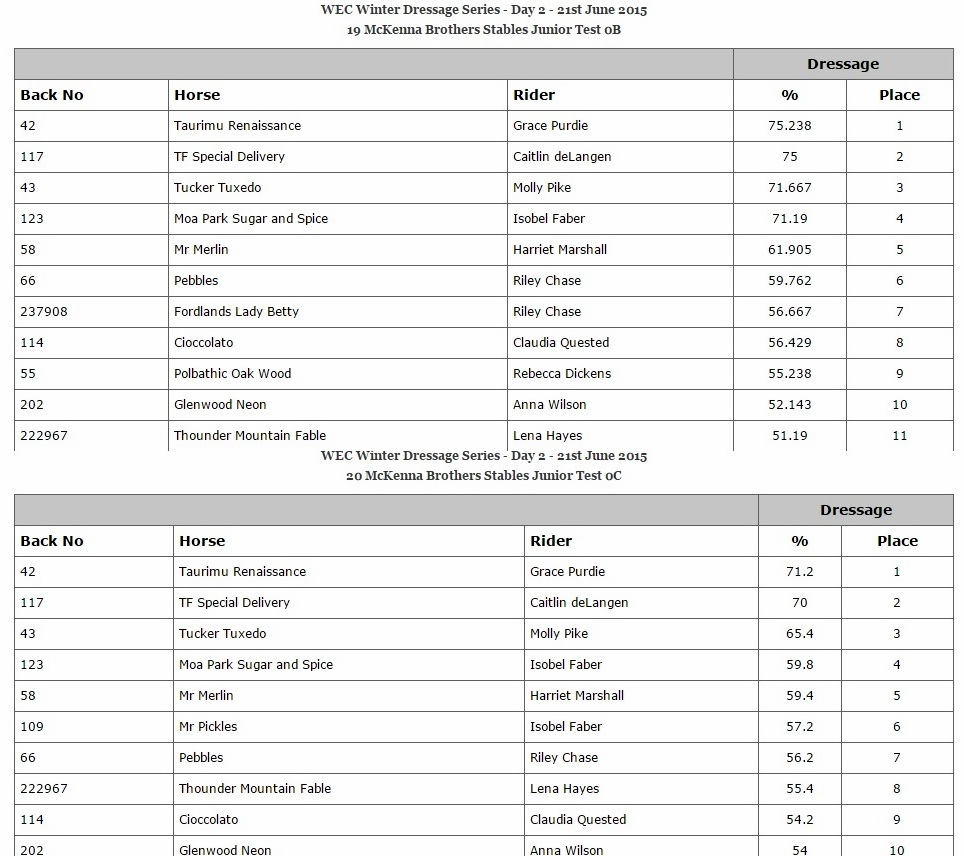 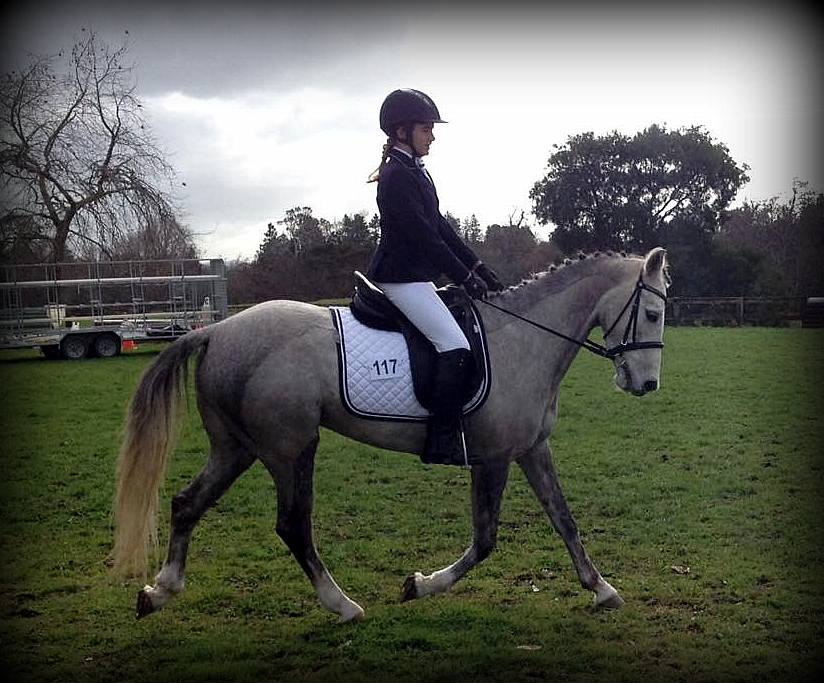 Toffee and Louisa made the trek north to compete in the CNC80 class at Pukemarama this weekend. I had commitments here on the farm with a mare arriving to be bred to Brennan so I was unable to go and I haven't found any purchase worthy photos so I am afraid this will be a words only blog about the day.

Toffee had a five minute warm up for the dressage, which is pretty much her ideal warm up as she's very good at just getting on with the job. Louisa was really happy with her test and even had fellow competitors on the sideline congratulate her on a lovely test. Unfortunately the judge didn't quite agree and she scored a pretty average 38.20 and into 11th place. Interestingly, at her first Horse Trial at the very beginning of the season, she did a very tense and tail swishy test and scored a 32.10 and at Dannevirke she did a lovely test for a 22.60. Dressage, so subjective!

Show jumping followed, clear and within the time and again, it sounds like compliments were made from the sidelines - I wish I had been there but apparently I have some video to look forward to.

Cross country - this is what it is all about after all! Toffee is still pretty green when it comes to cross country. Her first horse trial she was withdrawn after the Show Jumping because we decided to err on the side of caution when the weather was deteriorating rapidly and she had produced a less than ideal and exceptionally green show jumping round. So, this was only her second XC at a HT and her third ever (she had a green run around Dannevirke last year where the water was her undoing) and what an absolute star she was this time! Clean and clear and finishing JUST out of the placings in 7th (class of 32) and the youngest horse to finish in the top 10 - Go Toffee!

South Wairarapa PC are running an Express Event this coming weekend and Toffee will have one more go at 80cm before moving up to 95cm. Her first 95cm run will most likely be at North Wairarapa PC's Autumn ODE in March. Exciting!!

We had a great day out at the Dannevirke and Districts Pony Club ODE this weekend. A well organised and efficiently run event (so efficient that the judge was driving away and the arenas were getting packed up before we even got Toffee into the arena, haha!) with friendly people. The only downside was the incessant wind which blew and blew and blew ALL day!

I am very proud of our baby horse who did a lovely dressage test (with all of 5 minutes to warm up and a horrific squall blowing through JUST as she got there) to be the clear winner on 77.4%, a little over 7% ahead of the nearest competitor!

Show jumping was still a little green but she's just getting SO much better, every time. She put four on the floor when she overjumped the first of the double somewhat and ended up a little deep to the second element but was still in first place after the SJ, even with the 4 faults.

Her cross country was very green but she tried her heart out! It wasn't an easy first course and the water was her undoing BUT I'm uber proud of her and her fab jockey Louisa who is doing a fantastic job with her (because Toffee IS lovely but she is not always easy!).

Bring on the next competition I say but even more, bring on the Jock Paget Clinic that they're doing in 2 weeks!!!! Woot!!

Videos of her Show Jumping and some XC on the VIDEO's page and photos of dressage and show jumping in her album in the photo gallery.